Is it Shou Sugi Ban or Yakisugi?

What is Yakisugi? What is Shou Sugi Ban? Are they the same? Yes and no. The reason for the disparity spans two countries and three alphabets. Japan did not have a written system of language until Chinese was introduced. But these two languages do not have a common root language. They are entirely different. As a workaround, the Japanese used kanji ideograms to represent both Japanese and Chinese sounds. This practice would have unforeseen linguistic ramifications later on. 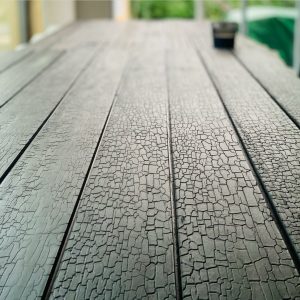 Modern Japanese has three scripting systems: kanji, hiragana, and katakana. Each kanji ideogram corresponds to a word. More words are created by combining characters. There are over 50,000 ideograms. A group of 2136 characters is used as everyday kanji characters. Students have to learn from 2,000 to 3,000 ideograms to read newspapers and books. Kanji is used to signify nouns, verbs, adjectives, and adverbs.

However, kanji alone is insufficient to represent all sounds in the Japanese language. Hiragana and katakana characters were developed to handle Japanese sounds and words with no kanji equivalent. Hiragana is based on the character set of Chinese calligraphy and is used to form sentences. Its symbols are written with a curving brush style. Katakana is a simplification of the original kanji character strokes and is mostly used for foreign words. Today, Japanese words can be written with only kanji ideograms, kanji and hiragana, or all three scripts.

When wood encounters saltwater, sun, and surf, it becomes more durable and takes on a unique appearance. In ancient times, carpenters would gather driftwood along the sea, but the supply was too low to satisfy demand. Carpenters and builders turned to fire and wood charring in the 1700s. 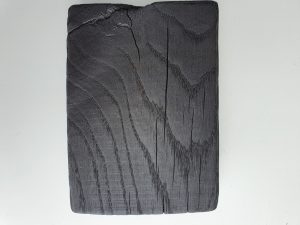 Builders found that Japanese cedar yielded the best results from burning. They called this new process Yakisugi. “Yaki” means burnt or treated with heat. Its ideogram is written as 「焼」and the words sounds like “yaki.” “Sugi” or「杉」means cypress (Cryptomeria japonica). In the West, this type of cypress is better known as Japanese cedar. A “wood plank” is 「板」or “ita.” The final three-word combination is yakisugita, or 「焼杉板」which literally translates to a burnt cedar board.

A mistranslation caused Yakisugi to become synonymous with Shou Sugi Ban. It occurred when the compound word 「焼杉板」was read in a mix of Japanese and Chinese pronunciation. In Chinese,「焼」is read and pronounced as “shou.” “Ban” came from saying「板」in Mandarin. If you read the compound in original Japanese, the result would have been the correct Yakisugi or yakisugita. However, because it was misread, the translation used in the West became Shou Sugi Ban.

Besides the general scarcity of wood in Japan, Yakisugi was displaced by cement and plastic building materials. The cost of applying the Japanese treatment to imported wood was high. The technique was used less and less until it was no longer in practice. In the last decade, architects and builders discovered the burnt wood technique dubbing it as Shou Sugi Ban.

In Europe and North America, the charred timber technique was tried on different types of trees like pine, cedar, spruce, Accoya, and larch. Happy with the results, charred wood usage has increased year after year. The main benefits of this traditional technique include incredible resistance to the elements and amazing durability with minimal maintenance.

Burning wood for building materials is not new. It’s done all over the world. Is there a difference between Yakisugi and Shou Sugi Ban? For purists, Yakisugi refers to the original method using Japanese cypress and natural oils. Shou Sugi Ban describes a general method of burning wood combined with natural and synthetic oils. Degmeda.eu has used Yakisugi techniques in creating wood products for siding, fencing, decking, and flooring projects. If you’re interested in learning more about this incredible wood preservation technique and what it can do for your home, simply visit our website.